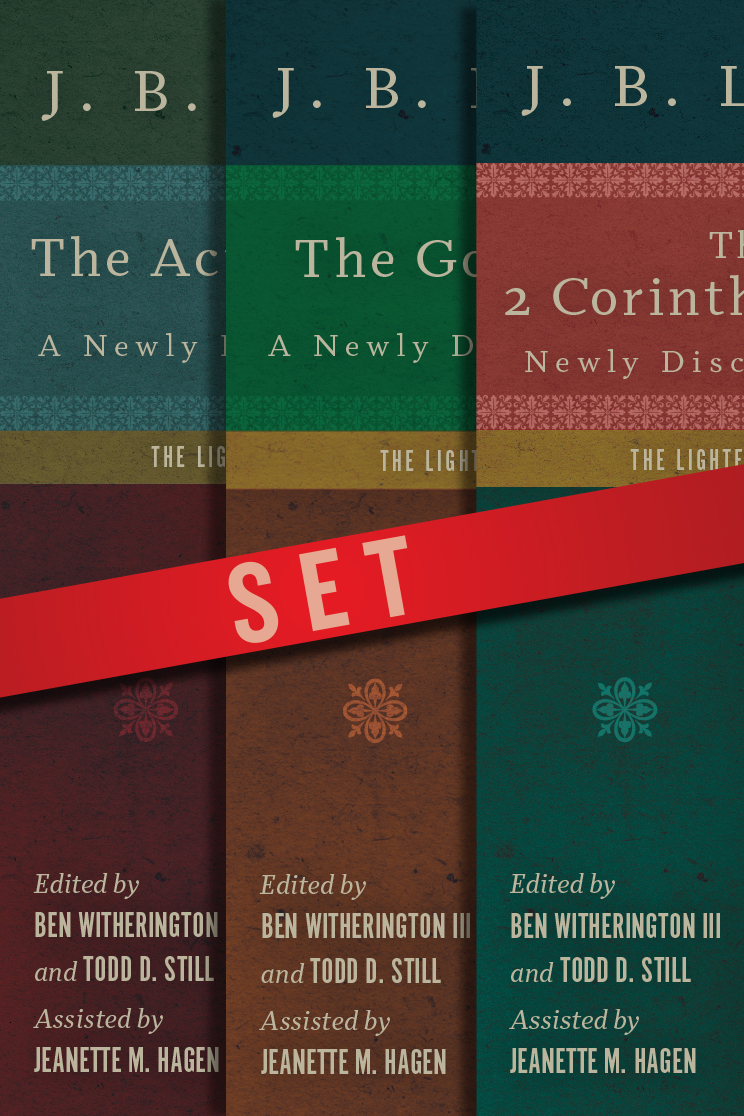 InterVarsity Press is proud to present The Lightfoot Legacy, a three-volume set of previously unpublished material from J. B. Lightfoot, one of the great biblical scholars of the modern era.

In the spring of 2013, Ben Witherington III discovered hundreds of pages of biblical commentary by Lightfoot in the Durham Cathedral Library. While incomplete, these commentaries represent a goldmine for historians and biblical scholars, as well as for the many people who have found Lightfoot's work both informative and edifying, deeply learned and pastorally sensitive.

Now on display for all to see, these commentary notes reveal a scholar well ahead of his time, one of the great minds of his or any generation. Well over a century later, Lightfoot's writings remain a relevant and significant resource for the church today.

Volume 1 covers the book of Acts, Volume 2 explores the Gospel of John, and Volume 3 covers 2 Corinthians and 1 Peter.

"The discovery and publication of previously unpublished commentaries on the New Testament by Joseph Barber Lightfoot is a highly significant event in the history of New Testament scholarship. For a start, these shed valuable light on the reception of the New Testament in the nineteenth century, representing the work of the foremost English scholar of that era whose linguistic and historical skills exhibit a quality of scholarship that few today can match. Not all of his historical, literary or theological judgments look fully convincing today, but his acute reading of the Greek text and his phenomenal range of knowledge can still contribute greatly to contemporary exegesis. Ben Witherington, Todd Still and Jeanette Hagen are to be warmly congratulated for their remarkable success in making such a significant voice from the past resound again today."

"A profound debt of gratitude is owed to Professors Witherington and Still for relentlessly pursuing, recovering, and editing J. B. Lightfoot?s notes on Acts. Harnack said it best: Lightfoot was a true liberal for he was 'an independent, free scholar . . . in the absolute sense of the word. He has never defended tradition for the tradition's sake.' We need more liberals like that today!"

"From Bede, the greatest European scholar of the seventh century, to today's world-class university sharing a world heritage site with a majestic cathedral, creative and careful study has long stood alongside prayer and worship here in Durham. It is therefore fitting that this amazing discovery of Lightfoot's handwritten manuscripts was made by one of the world's leading biblical scholars in the cathedral library. For within these pages, Lightfoot embodies that Durham tradition—outstanding independent scholarship offered humbly in the service of God."

"The discovery of hitherto unknown exegetical works by J. B. Lightfoot is a rare gift, full of potential for fresh insight both about the man himself (acknowledged worldwide as the leading scholar of his day) and, as he would have wished, about texts which he knew so well and which themselves express the heart of the gospel. Hearty congratulations to finder, editor and publisher on an unexpected and exciting addition to the core library of seminal biblical studies."

"Joseph Barber Lightfoot has been, for me, in many ways the epitome of what the commentator on New Testament and early church texts can and should aspire to. His detailed knowledge of the literature of the time was unsurpassed, and his ability to shed the light of that knowledge on the New Testament writings was without peer. His commentaries on New Testament texts and the early Fathers retain a relevance and a value to this day almost unique for nineteenth-century scholarship. That a fuller publication of his writings is now available in these volumes is a wonderful bonus for those who want to hear these New Testament and early church texts as they were first heard."

"Thanks to Witherington and his associates and to IVP for bringing this cache of material from the great J. B. Lightfoot into the public domain. His previously published works have remained important (his multivolume study of the apostolic fathers is essential for these writings), and this hitherto unpublished material will now also likely come to be seen as a valuable resource."

"J. B. Lightfoot was perhaps the greatest New Testament exegete in the nineteenth-century English-speaking world, and his works remain useful today. The discovery of his previously unpublished research, which addresses in a balanced and informed way many issues still debated today, is an epochal event in New Testament studies."

Learn more about J. B. Lightfoot at Wikipedia 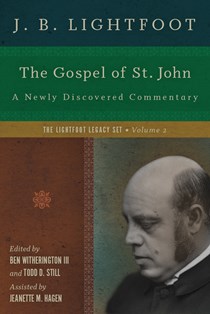 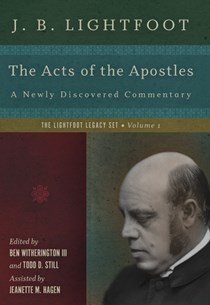 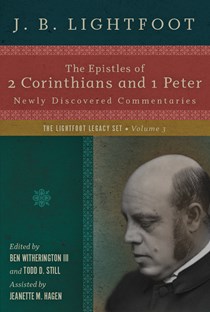 Ben Witherington III (PhD, University of Durham) is a prominent evangelical scholar and Jean R. Amos Professor of New Testament for Doctoral Studies at Asbury Theological Seminary. Witherington has written over forty books, including The Jesus Quest and The Paul Quest, both of which were selected as top biblical studies works by Christianity Today. His other works include The Indelible Image, Women and the Genesis of Christianity, The Gospel Code, A Week in the Life of Corinth, and commentaries on the entire New Testament. He also writes for many church and scholarly publications and is a frequent contributor to Patheos and Beliefnet.

Witherington is an elected member of the prestigious Studiorum Novi Testamenti Societas, a society dedicated to New Testament studies. He is a John Wesley Fellow for Life, a research fellow at Cambridge University, and a member of numerous professional organizations, including the Society of Biblical Literature, Society for the Study of the New Testament, and the Institute for Biblical Research. He previously taught at institutions like Ashland Theological Seminary, Vanderbilt University, Duke Divinity School, and Gordon-Conwell Theological Seminary.

An ordained pastor in the United Methodist Church and a popular lecturer, Witherington has presented seminars for churches, colleges, and biblical meetings around the world. He has led numerous study tours through the lands of the Bible and is known for bringing the text to life through incisive historical and cultural analysis. Along with many interviews on radio and television networks across the country, Witherington has been seen in programs such as 60 Minutes, 20/20, Dateline, and the Peter Jennings ABC special Jesus and Paul—The Word and the Witness. 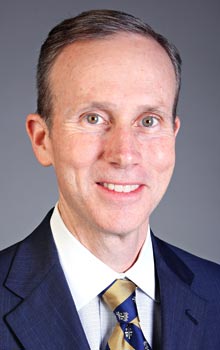 Todd D. Still (PhD, University of Glasgow) serves as Charles J. and Eleanor McLerran DeLancey Dean and the William M. Hinson Professor of Christian Scriptures at the George W. Truett Theological Seminary of Baylor University. He previously occupied the Bob D. Shepherd Chair of New Testament Interpretation at Gardner-Webb University's School of Divinity and served on faculty at Dallas Baptist University. In addition to numerous articles, reviews, and Bible study materials, Still is the author of Thinking through Paul: A Survey of His Life, Letters, and Theology, coauthored with Bruce W. Longenecker, Philippians & Philemon, and Jesus and Paul Reconnected: Fresh Pathways into an Old Debate. He has also coedited Tertullian & Paul (with David Wilhite) and After the First Urban Christians (with David G. Horrell). Beyond the classroom, Still is committed to and involved in local churches. A licensed and ordained Baptist minister, he has had the opportunity to preach and teach in many congregational and conference settings and has served in a variety of ministry capacities, including music minister, youth minister, Sunday school teacher, chaplain, and pastor. Still lives in Waco, TX, with his wife and two sons.