Hard Saying of the Day

Are you grappling with a difficult verse in the Bible? And are you looking for a short, easy-to-read answer that really makes sense without explaining away the verse? Visit this page for a daily excerpt from IVP's Hard Saying series.

The passage in question comes in Paul's letter to the Romans that deals with the relationship of Jewish and Gentile believers. The Jews viewed themselves as the elect of God, and they viewed Gentiles as those who could not possibly be chosen of God unless they became Jews (that is, became proselytes). Because of that attitude, some Jewish Christians argued that Gentile Christians needed to become Jews and keep the law if they really wanted to be saved, while others felt that while salvation was not at stake, without keeping the law one could not be fully pleasing to God. Paul opposes this teaching in Romans. In the first section of the book he has argued that Jews are just as lost as Gentiles, for it is not having the law that blesses one, but living the law. His main points are that both Jews and Gentiles needed Jesus' death and that if one is committed to Jesus he has all of God's salvation. Now in Romans 6--8 he is making three further points: (1) dispensing with the Mosaic law does not lead to more sinful living, for in Christ Christians die to sin as well as to the law, (2) the Mosaic law was not a solution for sin anyway, for it resulted in transforming innocent wrong into conscious sin, and (3) the Holy Spirit received through Christ is the solution to human sin, for while we have to cooperate with him, he is the one who makes us children of God. In the climax of his argument in Romans 9--11, Paul will conclude by showing the purpose of the Jewish nation and its relationship to the preaching of the gospel to the Gentiles. We are, then, in the middle of these three sections.

In the first part of chapter 8 Paul has discussed the role of the Spirit in overcoming sin in Christians, ending with a description of the believer's exalted status in Christ:

The Spirit himself testifies with our spirit that we are God's children. Now if we are children, then we are heirs--heirs of God and co-heirs with Christ, if indeed we share in his sufferings in order that we may also share in his glory. (Rom 8:16-17)

As is often the case in Paul's writing, he points not only to believers' exalted status, but also to their present reality of suffering. Identification with Christ is not simply identification with the exalted Christ, but also with the suffering Christ. Since living Christians have not yet died, they tend to experience more of the suffering than the exaltation. This observation leads into a meditation on the meaning of Christian suffering (Rom 8:18-25) and how the Spirit helps believers in the middle of their suffering (Rom 8:26-27).

Now we come to Paul's point, made in part in this verse. Despite the present reality of suffering (although God through his Spirit is in it with us), God will work history for good for everyone who loves God. These "who love God" are those who are the "called," for it is not just the Jewish people who are called, but everyone who hears and responds to the gospel. Christians are not simply called and then dropped or forgotten about, but called in accordance with God's purpose, which is God's plan in history. Paul has already referred to this grand purpose in Romans 8:18-25: God has a future hope for Christians, and not only for Christians, but also for the whole of the creation. However painful the present may be, it is part of God's grand plan to redeem human beings from sin, to spread the gospel throughout the earth and to bring his redemption to those human beings who turn to him and to the creation itself.

Another way of putting this is that those whom God foreknew he predestined to be like his Son. The idea of knowing a person in Hebraic thought (in which Paul was immersed) is that of coming into relationship with a person (Gen 18:19; Ps 1:6; Jer 1:3; Hos 13:5; Amos 3:2; or, negatively, Mt 7:23). Now we find out that it is not simply the physical children of Abraham with whom God has come into a relationship, but all of those who love God. Therefore the idea of "foreknew" is to come into a relationship with someone before some point in time. This "coming-into-relationship-before" can mean one of two things: (1) God chose this relationship with believers before they ever existed, for he has worked through the whole course of history for the salvation of such people and (2) God chose them as a group before they existed, for he also formed them and sent the gospel to them. Yet, whichever of the two is the focus of Paul's concern, it is not only that God chose them, but that he also has a plan for them, which is to be like his Son. Unfortunately for their comfort, this includes not only the glory of his Son, but also the sufferings of his Son. Thus Christians' present sufferings for Jesus have a purpose: to make them like Jesus. In the next verse Paul will mention other benefits: how those who love God were called through the gospel, justified through the death of Christ and are certainly to be glorified when Christ returns.

Thus Paul is not answering our question about predestination at all. He is writing in a book addressed to the church in Rome. This means the letter is addressed to people who were already Christians. He is in the middle of a section where he has been talking about the sufferings of the Christian life. Now he is telling them the purpose of these sufferings. However unpleasant they may be (and given what non-Christians thought about Christians in the culture, they may have been very unpleasant indeed), these sufferings do not mean that God has forgotten them. "On the contrary," Paul says, "when you were called in the gospel, it was part of a plan of God. That plan was not to leave you as you were. No, God, according to his plan, entered into relationship with you in order to make you like Jesus. Part of that, of course, is suffering, but the other part is glory. So when the plan is complete you will stand before God fully justified and gloried, in the very image of his Son." That is why in Romans 8:31-39 we get the exclamations of praise to God. Christians have not fallen out of his hand; even when they do not see him, he is bringing them on toward his glorious purpose for them.

So what is God saying about predestination? All those who love God are predestined. God has a previously thought-out plan for them. And that plan is to make them like Jesus. In this security every lover of God can rest, even if their present life seems full of pain and chaos.

Expand your daily time with God with these devotionals or our Daily Bible Podcast.

Experience the entire Bible in just fifteen minutes a day for one year. Get started now and listen to Episode 1 below.

Keep listening to Get in The Word with Truth's Table Podcast. 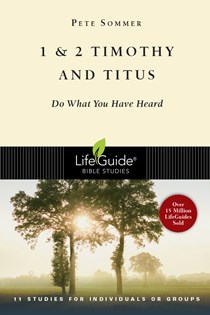 As young church leaders, Timothy and Titus faced daunting challenges. But Paul encouraged them to put aside timidity and insecurity, and to find strength in Christ. In this eleven-session LifeGuide® Bible Study, Pete Sommer guides you into study of these letters, also helping you find the support you need to follow through in obedience to God's Word.