Margaret Kim Peterson (Ph.D. Duke University, Durham, North Carolina and M.Div. Gordon-Conwell Theological Seminary, South Hamilton, Massachusetts) serves as associate professor of theology at Eastern University, St. Davids, Pennsylvania. She is the author of Sing Me to Heaven (Brazos, 2003) and Keeping House (Jossey Bass, 2007) as well as having written several articles and contributing chapters to books. She wrote a chapter for Women, Ministry and the Gospel (InterVarsity Press, 2007) as well as a section titled "Marriage" in the The IVP Women's Bible Commentary (InterVarsity Press, 2002). Peterson has given numerous lectures and offered courses at conferences, churches and universities on a wide range of topics including healing, hospitality, AIDS awareness and support, Trinitarian doctrine and marriage. On several occassions, she has delivered a lecture on love and marriage titled, "God Doesn't Want to Write Your Love Story" with her husband, Dwight. 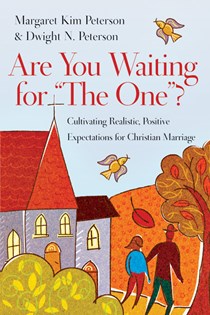 Are You Waiting for "The One"?
Margaret Kim Peterson and Dwight N. Peterson
3310