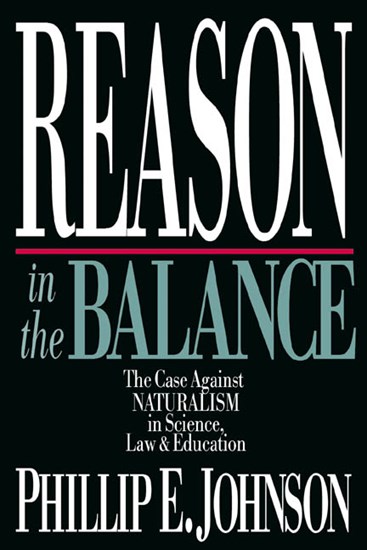 Reason in the Balance

The Case Against Naturalism in Science, Law Education

In his first book, Darwin on Trial, Berkeley law professor Phillip E. Johnson took on the heavyweights of science. And he got their attention, even provoking a response from neo-Darwinist Stephen Jay Gould in the pages of Scientific American. Now Johnson's back with a book that expands his critique from science to law, education and today's culture wars.

Why is morality forced out of public school curriculum?

Can Christians believe in God and evolution?

Why aren't we getting anywhere in the debate over abortion?

Will the Grand Unified Theory solve the riddle of the universe?

Johnson dares to answer these and other tough, touchy questions. He reveals why naturalism (the philosophy that the material world is all there was, is and will be) has become "the established religious philosophy of America," supplanting Judeo-Christian belief. He shows how naturalism undergirds science, law, education and popular culture. And he argues that naturalism has even infiltrated the church--marginalizing opposition as irrational, and encouraging Christians to adopt a more "reasonable" stance.

In Reason in the Balance, Johnson writes energetically and persuasively--chapter by chapter zeroing in on the chinks in the argument for naturalism. He explores nearly every acre of today's cultural battlefield: God, sex education, evolution, abortion, cosmology and particle physics, what our public schools should teach, the basis of law, the meaning of reason and a few other things that matter. Armed with biblical truth, common sense and a clear understanding of his foe, he steps out like David to fell the intellectual Goliath of our day.

"Phillip Johnson is a scrappy Christian thinker who is taking on several important debates about law, education and science in contemporary culture. He strikes many sparks, and some of them illuminate the issues in helpful ways. Reason in the Balance will inflict a few burns, but it will also shed some light."

"Christians are beginning to leave their anti-intellectualism behind and recognize that ideas really matter. But with Reason in the Balance Phillip Johnson has moved this shift a quantum leap further. . . . No one who cares to understand the contemporary culture wars and be involved in their resolution can afford to neglect this book."

"With rare lucidity and bracing urgency, Reason in the Balance makes a convincing case for the liberation of nature, and of human nature, from naturalism's claim that reality is less than we know it to be. In advancing this argument, Phillip Johnson proves himself a worthy heir of Samuel Johnson."

"Phillip Johnson is an author who is simply to be read, and closely studied, by all who wish to understand the forces that actually govern the intellectual world in the United States today."

"Having demolished the scientific case for Darwinism in his first book, Phillip Johnson now answers the question 'So what?' In a brilliant analysis, he shows how Darwinist assumptions underlie current controversies in ethics, law, education and public policy."

"Reason in the Balance is a serious and original challenge to the secularist orthodoxy that still dominates the public square. Johnson's case in support of intelligent design . . . is credibly and comprehensively presented, and his ease with the scientific arguments of naturalism is particularly impressive."

"Johnson fires a major salvo in the culture wars with this sweeping critique of the reigning materialist philosophy."

"There are plenty of critics of 'Godless science,' but few are more intelligent (or better writers) than Johnson."

"In a brilliantly controversial polemic, Johnson fires an intellectual broadside against what he sees as the marginalization of theism in public life and explores its implications for society and religion. . . . Well argued and astute, this critical work makes an exciting contribution to contemporary scientific and cultural debate."

"No scholar has more courageously and more competently challenged the reigning naturalistic presupposition and antisupernatural hostility that dominate contemporary science. Darwinian evolutionists have been unable to ignore him--and more significantly--unable to refute him."

"What distinguishes Johnson is his penetrating understanding of science and its limits. For that reason, he stands in the great tradition of Blake and Swift, companion skeptics of Enlightenment hype."

"Clear and accessible. . . . Johnson shows how naturalistic precommitments influence the search for a grand, comprehensive vision of all reality."

Journal of Church and State

"Recommend this book as one of the valuable apologetic contributions of our day."

Introduction
1. Is God Unconstitutional?
2. The Established Religious Philosophy of America
3. The Grand Metaphysical Story of Science
4. Is There a Blind Watchmaker?
5. Theistic Naturalism Theistic Realism
6. Realism Rationality
7. Natural Law
8. Education
9. The Subtext of Contempt
10. The Beginning of Reason

Phillip E. Johnson taught law for more than thirty years at the University of California, Berkeley, where he is professor emeritus. He is recognized as a leading spokesman for the intelligent design movement, and is the author of many books, including Darwin on Trial, Reason in the Balance, and Defeating Darwinism by Opening Minds.

Learn more about the 20th Anniversary of Darwin on Trial.