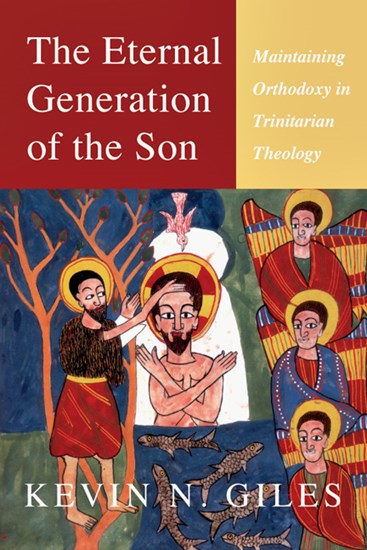 The Eternal Generation of the Son

Should all Christians, especially evangelicals, hold on to the doctrine of the eternal generation of the Son? What is lost if we don't?

Theologian Kevin Giles defends the historically orthodox and ecumenical doctrine of the eternal generation of the Son of God. He argues on biblical, historical and theological bases that, given its fundamental meaning, this formulation is indispensable, irreplaceable and faithful to Christian revelation.

The book will be especially helpful in the current discussion of this doctrine. It will also be of interest to students, pastors and laypersons who want to delve into the Christian understanding of the identity of the Son of God and serious study of trinitarian theology.

"Despite its prominent role in classic trinitarian orthodoxy, the eternal generation of the Son is routinely rejected by some evangelicals as unbiblical, speculative and philosophically problematic. In conversation with the great theologians of the church, Kevin Giles helps us understand the theological importance of eternal generation for the doctrine of the Trinity and presents a persuasive biblical and theological argument for why we, as evangelicals, should embrace this doctrine."

"Kevin Giles, who has established a reputation as an important voice in support of the Nicene faith and of the traditional doctrine of the Trinity, enhances that reputation in this book by trenchantly illustrating why those who today oppose the doctrine that the Son is eternally begotten of the Father end up in opposition both to the biblical witness and to the Nicene faith. Giles meticulously argues that those evangelicals today who reject this doctrine have unwittingly embraced the very Arian views they themselves oppose. This is a book that will challenge readers to understand Scripture and the historical development of trinitarian doctrine once again before embracing views that unwittingly undermine the Son?s true deity. For anyone interested in seeing the practical implications of sound trinitarian theology and Christology, this book is must reading."

"If the doctrine of the Trinity goes wrong, every other Christian doctrine will necessarily implode. The church fathers surely understood this. Yet within evangelical circles, a departure from classical trinitarian thought is discernible regarding the eternal generation of the Son. Kevin Giles has recognized this drift, analyzes it well and calls us back to a better way."

"In The Eternal Generation of the Son, Kevin Giles hits a home run in terms of defending the traditional, orthodox doctrine mentioned in its title. He does it in three ways: this doctrine is the only way reasonably to interpret Scripture; it is the consensual teaching of historic Christianity; it alone safeguards against the heresy of subordinationism of the Son. Game won; case closed. Let's move on."

"Rejecting the biblicism at the root of problematic presentations of trinitarian doctrine among evangelical theologians, Kevin Giles mounts a vigorous defense of the Nicene teaching of the eternal generation of the Son. His book expounds with uncommon depth and lucidity both the biblical background and the traditional reception of the doctrine of the relation between the Father and the Son."

"Kevin Giles has done the theological community a service with his detailed account of debates on the issue of the eternal generation of the Son by the Father. His work represents a fine example of a theological reading of Scripture drawing on the 'cloud of witnesses' throughout the ages to defend and explain this basic trinitarian doctrine."

"Historic Trinitarianism has struggled to find meaning in the creedal confession that the Son is 'begotten, not made.' Giles has helped readers comprehend more fully the perils of subordinationism and the need to preserve the unanimous Christian tradition of 'the eternal generation of the Son.' Over all, this is a splendid work, readable, highly informative, and cogently argued."

"This study is marked by clarity of exposition and thorough footnotes, making it a valuable addition to the 'recommended' list for any graduate course on the doctrine of God. While the arguments draw upon evangelical commitments, students of the Catholic tradition would certainly benefit from its perspective on the discussion of God's triunity."

"The argument is rigorous and persuasive, and Giles' defense of the doctrine is much needed and timely given the pervasive influence of evangelical scholars who advocate the abandonment of the doctrine of the Son's eternal generation."

"A recommended read, not only for the particulars of the subject, but also for the lessons to learn concerning the necessary depth of understanding that today?s generation of church leaders need to attain as a core component of their vocation."

Faith, Freedom and the Spirit

Kevin Giles (ThD, Australian College of Theology) is an ordained Anglican minister who was in parish ministry for forty years. He has studied in Australia, England, and Germany, publishing broadly on topics such as the doctrine of the church, leadership in the apostolic age, the equality of men and women, the Trinity, and congregational life.

Giles has contributed numerous articles to scholarly journals, and to IVP's Dictionary of Jesus and the Gospels and Dictionary of the Later New Testament and Its Development. Among his books are What on Earth Is the Church? and Patterns of Ministry Among the First Christians. He has also served as a minister and consulting theologian for World Vision Australia. Giles and his wife Lynley have four grown up children and nine grandchildren. They live in Melbourne, Australia.