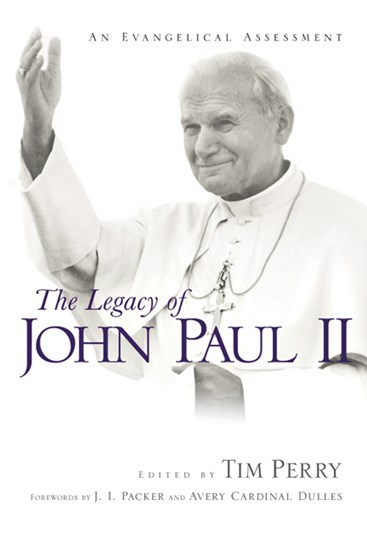 The Legacy of John Paul II

The papacy of John Paul II was phenomenal, and not least for the fact that many evangelicals came to honor and respect him. Running parallel with this pope's ministry was an unprecedented level of conversation between Protestant evangelicals and Roman Catholics. In the West, at least, there was a growing sense that in a post-Christian society it was time for Christians of orthodox faith to explore their common commitments and to make common cause in the great moral and social issues of the day. Tim Perry calls on some of the best evangelical minds to offer their assessments of the thought of John Paul II as expressed in his major encyclicals.

"John Paul II was one of the most significant witnesses to the gospel of Jesus Christ in recent times and a teacher of the church whose influence will extend far into the future. Here prominent evangelical thinkers assess his legacy with insight and appreciation through an engagement with the major encyclicals of his papacy. This is an outstanding collection of essays that bears witness to the vitality of both Roman Catholic and evangelical thought in service to our common Lord."

"Vigorous, comprehensive and thoroughly evangelical, The Legacy of John Paul II makes a valuable contribution to our understanding of one of the great Christian leaders of the last century, and advances the cause of Christian unity."

"In the sixteenth century--a time when Protestants were not inclined to say nice things about Catholic leaders--the Reformer Theodore Beza addressed one of his treatises to 'the more sensible part of those who call themselves Roman Catholics.' This fine book of essays is a testimony to a Catholic pope whom many of us in the evangelical world revered, not only as a 'sensible' spiritual leader, but as someone who on various occasions and on various subjects spoke words of godly wisdom, both to us and for us."

"Of the many legacies of the twenty-six--year pontificate of John Paul II is the astonishing attentiveness of non-Catholics to his teaching ministry, as is demonstrated in this informative and provocative book. Such attentiveness does not always mean agreement, but it is a genuinely new thing in the world Christian movement."

"A remarkable book. At one and the same time, it is an excellent guide both to the religious and ethical thought of this highly influential pope and to the growing evangelical willingness to engage with it. Highly recommended."

"An excellent commentary on the thought of JP2, providing helpful perspectives, criticism, and reflection on the state of evangelical thought today. . . The book will appeal to all interested in the thought of John Paul II as well as those encouraged by the Catholic-evangelical dialogue. It should also be helpful to anyone interested in the role of the Church in the modern world and insightful summaries of some of the best arguments for a theocentric humanism."

"If someone were to begin a study course in Catholic teaching, they could hardly do better than a careful reading of The Legacy of John Paul II, a collection of essays by a fine roster of evangelical writers who reflect on the important encyclicals of the late Polish pope."

"A shining example of current openness and theological debate among Christians."

". . . Dramatically enhances the global enterprise of interpretation of John Paul II. A great gift to clergy, ecumenists, scholars, and advanced students, the book sheds new light on an unforgettable doctor of the church."

"An excellent book. It shows evangelical theologians reading and drawing on John Paul's philosophy and social teaching with remarkable sympathy."

". . . Sheds the light of evangelical theological scholarship on John Paul?s efforts to remind the world that human beings can indeed grasp the truth of things, including the moral truths of things."

Foreword by J. I. Packer

Introduction: For Such a Time as This: Living With(in) the Legacy of John Paul II
Tim Perry

2. A deep amazement at man?s worth and dignity: Technology and the Person in Redemptor hominis
Derek S. Jeffreys

12. Redemptoris missio, Into All the World
Terrance L. Tiessen

Tim Perry, PhD, was formerly an associate professor of theology at Providence College, Otterburne, Manitoba, Canada. He is the author of Mary for Evangelicals, Pope John Paul II: An Evangelical Assessment, (both InterVarsity Press), Blessed Is She (Morehouse), and Radical Difference: A Defense of Hendrik Kraemer's Theology of Religions (Wilfrid Laurier University Press).