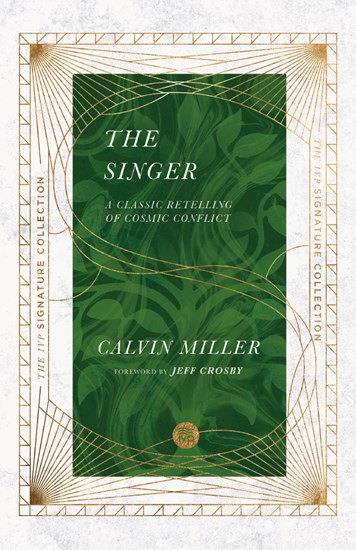 A Classic Retelling of Cosmic Conflict

"In the beginning was the song of love."

In this timeless classic, Calvin Miller retells the story of Jesus through an allegorical poem about a Singer whose song could not be silenced. Since it was first published in 1975, The Singer has left an indelible impression on Christian literature and offered believers and seekers the world over a deeply personal encounter with the gospel.

With a new foreword by IVP Publisher Jeffrey Crosby and an updated interior design, The Singer is now available as part of the IVP Signature Collection, which features special editions of iconic books in celebration of the seventy-fifth anniversary of InterVarsity Press. Now there's also a companion Bible study guide available with eight sessions exploring the characters in the text.

"For decades The Singer has done the one thing most necessary: to make Jesus himself accessible and attractive in ways that stick in the mind and soul, so that he can do his work of renewing the life of God in the individual. Calvin Miller's great gift is to sing Jesus powerfully, to the blessing of our generation and those to come."

"The Singer was not simply a book for me. It was an event. It was the first demonstration in our time that the gospel could be newly presented to the world at the level of the imagination. It deserves to be called the first true Christian classic of our generation."

"It is no surprise to me that Calvin Miller's The Singer has captured the hearts and imaginations of so many over the past twenty-five years. When I first read it (in manuscript), I knew at once that this was a story/song for the ages, with its vivid details and its skillful knots and weavings of profound truth into words. And as a poet, my heart was gladdened to know that nonreaders of poetry were being welcomed into this poetic masterpiece, were entering and reading it with delight!"

Luci Shaw, author of Thumbprint in the Clay

"Has The Singer impacted my life? You might say that. Though it has been a quarter of a century, I can remember where I was when I received it (in a parked car on a college campus). I remember the weather (bright spring afternoon). And I remember the joy, as the prose and passion of Miller's heart came alive. Within weeks the book was dog-eared and well worn. Through it Miller showed more than a fresh way to work with words; he showed a fresh way to look at Christ. To him, for that, I am eternally grateful. Has The Singer impacted my life? I suppose you could say that."

"The Singer is one of those rare books that cannot have enough good said about it. It absolutely sings to us of the greatness and goodness of the God and Father of our Lord Jesus Christ."

"The Singer was my first Calvin Miller book. I was hooked. Each page seemed to explode with a fresh combination of poetic energy and gospel aliveness. Every book I've read since (and I think I've read them all) deepens my appreciation."

"The Singer was a groundbreaking book, and I'm delighted to see its reintroduction."

Philip Yancey, author of The Jesus I Never Knew

"We read The Singer together soon after it first came out. It was more than a breath of fresh air—it led us into a new dimension in our understanding of the reality of Jesus Christ and of all that he can mean to us."

"When I was a young questor, I found in a university bookstore a trilogy of books that impacted my life so deeply that—twenty-five years later—I find myself still quoting lines and discussing concepts of truth from them. Literature like The Singer Trilogy will live—like Milton's Paradise Lost and James Weldon Johnson's God's Trombones. The Singer must never be allowed to be out of print. Every generation needs to read it."

"The Singer refreshes the old story with new insights and deep emotions. . . . My heart was moved; my mind was stretched; my soul was blessed."

"The Singer left an imprint of joy on my life twenty-five years ago. . . . Calvin Miller's work is a definitive illustration of God's ongoing creativity through a believing artist and gives cause for new celebration."

"The Singer not only gives a fresh and insightful portrait of Christ the 'Troubador,' it continues to set the pace for books that engage both the imagination and the soul."

"The Singer is a classic. It stands as one of the greatest exercises in 'sound theology' in Christian history. Calvin Miller was of 'sound mind' long before the rest of us."

"When Calvin Miller's narrative poem The Singer arrived in 1975, so distinct in imagination and style, I was amazed at its strangeness, originality, power, and vividness. In form, the Troubadour's story was fine and open and organic—an absolutely brilliant retelling of the Gospels. In the intervening years, as I have come to know Miller as a friend and fellow traveler, I have often been amazed at the range of his knowing and feeling humanity. . . . He is truly a gift from the Earthmaker."

"The Singer is one of those books that expands my mind, explodes my imagination, and excites my heart. Our Lord becomes so refreshingly real that I see him so personally. The years haven't diminished its power in my life."

Warren Wiersbe, author of Preaching and Teaching with Imagination

"It must be true that poetry—or song—is the required vehicle of intimate communication with or about God! If so, that is part of the power that gripped me when I first opened Calvin Miller's The Singer."

"A great surprise came when I first read The Singer in manuscript: here was a magnificent, original, poetic, emotionally charged retelling of the greatest story ever told. A joy to read then and to reread now!"

"For twenty-five years the voice of The Singer has echoed through the land, resonating in thousands of hearts and minds. Calvin Miller has discovered in the Singer's voice the mystery of the Deepest Song—that the One who sang the world into being is in the process of singing the world together. And he invites us to sing along."

"Calvin Miller is the poet laureate of today's evangelical world, and The Singer is among his most remarkable literary works. Miller has something profound to say, and he says it beautifully. The Singer is one of a handful of contemporary Christian works that will still be read a century from now."

A Week in the Life of Ephesus 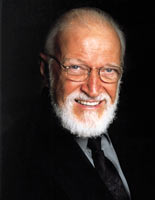 Calvin Miller (1936–2012) was a pastor, professor and storyteller, best known for The Singer Trilogy, a mythic retelling of the New Testament story in the spirit of C. S. Lewis and J. R. R. Tolkien. A prolific artist and a writer's writer, Miller garnered respect and praise throughout his career from peers like Luci Shaw, Max Lucado and Philip Yancey. He was the author of more than forty books of popular theology and Christian inspiration including such recent books as Letters to Heaven, The Path of Celtic Prayer, Letters to a Young Pastor and his memoir Life Is Mostly Edges.