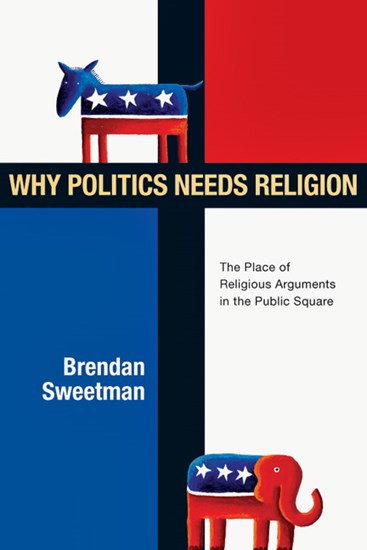 The Place of Religious Arguments in the Public Square

Can relligion and politics mix? Many voices reply, "No way!"

Yet in this provocative and timely book, Brendan Sweetman argues against this charge and the various sophisticated arguments that support it.

As we witness the clash of religious and secular worldviews he claims that our pluralistic democratic society will be best served when the faith elements of secularism are acknowledged and the rational elements of religious arguments are allowed to inform the momentous debates taking place in the public square.

In fact, Sweetman contends that "politics needs religion if it is to be truly democratic, concerned with fairness among worldviews, equality and a vigorous public discussion."

"Why Politics Needs Religion is a wonderfully practical and plain-spoken defense not only of the use of religious reasoning in public dialogue, but also of the legitimacy of seeing secular reasoning as no less 'religious.' It will serve as a welcome aid to those religious people who feel marginalized--even besieged--by the secularist boundaries built around much public debate in our day."

"This is a unique book on a desperately important topic for our times. Every person's life is governed by a worldview, for good or ill, but very few people realize how this works or understand the vast influence their worldview exercises on how they see and think about events and people. Hence, they remain more or less at the mercy of their overall orientation in life--and those of others. This clear, thorough and forceful treatment of the indispensable contribution that religion and religion alone can make to public life helps us get past many of the confusions that now mar our legislatures, courts and other public arenas. Most of all, educators need to study it carefully and use it with their students."

"It is commonly said today that public discourse is dangerously polarized. This important book shows how the polarization is not just over conflicting political and moral views. It is over how we define what counts as genuinely public discourse. The interaction of religion and politics is as inescapable as are disagreements about that interaction inevitable. This book brings to the discussion a rare mastery of diverse arguments combined with a generosity of spirit and penetrating insight that can help us engage our differences within the bond of civility."

"Brendan Sweetman has done us a service for continuing the rich conversation about the relationship between religion and politics."

"A first-rate book--original in thought, vigorous in prose, and bulging with bibliographic reference."

"This book serves as a brief to let the religious contend for public policies on religious grounds on a truly equal footing. Let the contest begin."

"Sweetman shows why religion is important to any debate, but it, or any other idealism, should not overshadow the moral issues. Our beliefs have a definite impact on our morals and how we feel they should be handled. Sweetman argues that we don't need to prove our beliefs, but rather keep them rational and realize other groups also have rational beliefs. And for us to really have a democracy, and have a fair worldview of who and what we are, we need to include religion in politics."

"Sweetman's work is not merely a defense of religion's place in the public arena, but a promotion of the religious worldview as more reasonable than the prevailing secularism. His arguments are cogent, accessible, and thought-provoking. Highly recommended [to] lower-level undergraduates through faculty/researchers [and] general readers."

"Sweetman addresses major matters which are highly relevant to contemporary political debates. His book should stimulate hard thinking, not least by those who claim a historic position regarding the relationship of religion and politics."

Acknowledgments
Introduction: A New Perspective on Religion and Politics

4. Keeping Religion Out of Politics I
Religious Beliefs Should Be Exluded Because They Are "Religious"
Traditional Religious Beliefs Cannot Be Based on Reason and Evidence
"Secular Reason" Does Not Imply Secularism
Secularism Can Better Achieve Overall Agreement Among Worldviews

5. Keeping Religion Out of Politics II
Most Religious Beliefs Are Higher-Order Beliefs, and So Should Be Kept Private
Religion Is Dangerous; Secularism is Benign
Religious Beliefs Should Not Be Forced by law on Those Who Do Not Think They Are True
Religious Views Should Be Excluded According to the U.S. Constitution

7. Religion in Politics
Introducing Lower-Order, Rational Beliefs into Public Arguments
A Seculocracy for a Secularist People?
Some Practical Applications
The Relationship Between Church and State
A Fictional Example: Form and Content
Looking at the World Upside Down: On Revising Our Terminology

Human Dignity in the Biotech Century