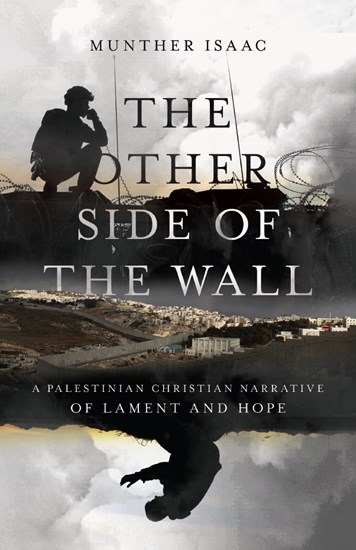 The Other Side of the Wall

A Palestinian Christian Narrative of Lament and Hope

This book provides an opportunity to hear the realities of life on the ground from a leading Palestinian pastor and theologian. Munther Isaac gives the perspective of Palestinian Christians on the other side of the separation wall surrounding most Palestinian West Bank cities today. Isaac laments the injustices suffered by the Palestinian people but holds out hope for a just peace and ways to befriend and love his Jewish and Muslim neighbors. In contrast to the dominant religious and nationalistic ideologies and agendas for the region, he offers a theology of the land and a vision for a shared land that belongs to God, where there are no second-class citizens of any kind.

"This book is my invitation to you," Isaac writes, "to step into the other side of the wall and listen to our stories and perspective. It is my humble request to you to allow me to share how Palestinians experience God, read the Bible, and have been touched and liberated by Jesus—a fellow Bethlehemite who has challenged us to see others as neighbors and love them as ourselves. . . . This book paints a picture of our story of faith, lament, and hope. And I invite you to join and listen, on our side of the wall."

"There is a wall encircling Bethlehem. It is both a reality (made of cement and nine meters high) and a symbol for the life of Palestinian Christians and Muslims: walled, occupied, segregated. In this remarkable book, Munther Isaac takes us behind that wall and offers us a glimpse into things that are generally kept from view. He tells a story that is as compelling as it is heart wrenching, a story that every Christian needs to understand to grasp one seemingly endless conflict in the Middle East."

Gary M. Burge, professor of New Testament and dean of the faculty at Calvin Theological Seminary, author of Whose Land? Whose Promise? What Christians Are Not Being Told About Israel and the Palestinians

"Munther Isaac's book is a heart-rending cry for truth and justice on behalf of the Palestinian church. He tackles head-on the disinformation, ignorance, and terrible misuse of biblical texts that have led to the widespread American evangelical support for the occupation of Palestinian territories and the ongoing oppression of its people. This book should be compulsory reading in all theological seminaries and Bible colleges. Will it disrupt and halt the self-justifying narrative of Christian Zionism? One can only pray that, in God's mercy, it will."

"Dr. Isaac claims that he is sharing his life journey, but actually it is a journey of humanity in pursuit of dignity, justice, and peace. In a skillful and passionate manner, the author opens a wide window in the 'wall' so the reader will see both sides. I do hope that this timely book contributes to the bringing together of the three neighbors—Muslims, Christians, and Jews—to build bridges of just peace rather than walls of hatred."

"Munther Isaac is a Palestinian Christian and as such an heir to the unbroken Christian presence in the land of Jesus going back to the early church. In this provocative book, he writes with the passion and urgency of an Old Testament prophet, offering a direct challenge to theologies from the West that have been weaponized against him and others like him in the Holy Land. His words will surely challenge and discomfort many American Christians, but if we are ever to become the makers of peace and the agents of God's kingdom we are called to be, we must learn to listen to prophetic voices outside our own culture and traditions, and especially to the vulnerable, the powerless, and those who seek justice and peace."

Todd Deatherage, cofounder and executive director of the Telos Group

"Munther Isaac's deeply moving The Other Side of the Wall tells his story as a Christian growing up in the Palestinian town of Bethlehem over decades of violence, war, and occupation. The reading of Isaac's Palestinian narrative in no way negates Jewish ties to the land but rather tells an often-unheard side of the story. Isaac's experiences of dehumanization and wrestling with God's purpose for the Palestinian people is one with which Christians around the world must contend. Not only that, Christians often contribute further to the suffering of the Palestinian people by elevating one people group over another. The Other Side of the Wall is a must-read, that even in the midst of great suffering and loss and decades of ongoing occupation, Isaac continues to hold on to hope in Christ. He reminds us that our faith can move mountains, elevate justice, and prepare a path to a better world for Palestinians and all people in the Middle East and the world."

"Here is a passionate cri de coeur from a Palestinian theologian addressed to the worldwide church—and especially to those who call themselves evangelicals. Unlike those who write about Israel from the safety of their ivory towers outside the Middle East, Munther Isaac has lived all his life under occupation on the West Bank and understands the history and politics the Israeli-Palestinian conflict. The book is full of memorable personal experiences and biblical exposition that is grounded in serious scholarship. It is well documented, thoroughly up to date, and amazingly readable. I can't think of a more powerful and moving account of what it means to live out the Sermon on the Mount in an impossibly difficult situation. In the end we are presented not just with spiritual insights but with a realistic vision of how this seemingly endless conflict could actually be resolved."

"This is a voice that must be heard. As an evangelical biblical theologian and church leader, Munther Isaac speaks on behalf of sisters and brothers in Christ whose story and very existence is ignored and marginalized in the West. A wealth of historical and personal experience, including his own, authenticates the educative challenge of his biblical and theological perspectives. The Other Side of the Wall helps us appreciate the other side of an argument that is all too often assumed to have only one legitimate side for Bible-believing Christians."

"This is an important book and easy read for anyone who wants to understand the reality in occupied Palestine as experienced by a Palestinian, Christian, evangelical, and Lutheran pastor. Munther Isaac invites us to listen to the cries of those living on the other side of the wall, whose voices are often silenced yet still struggling to amplify the gospel of Christ the liberator. In a world where walls have become so popular, this message of lament and hope is crucial and desperately needed."

Mitri Raheb, president of Dar al-Kalima University College of Arts and Culture, author of I Am a Palestinian Christian
More

1. An Invitation
2. Ignored, Discredited, and Dehumanized
3. Christian Zionism as Imperial Theology
4. The Bible, the Land, and the Modern State of Israel
5. Who Is My Neighbor?
6. My Jewish Neighbor
7. My Muslim Neighbor
8. Blessed Are the Peacemakers
9. Lamenting in Hope
10. Letters of Hope
Epilogue: The Other Side of the Wall: The Story Continues

From Cairo to Christ

Munther Isaac (PhD, Oxford Centre for Mission Studies) is the academic dean of Bethlehem Bible College in Palestine and director of the Christ at the Checkpoint conference. He is also pastor of Christmas Evangelical Lutheran Church in Bethlehem. He is the author of From Land to Lands, from Eden to the Renewed Earth: A Christ-Centered Biblical Theology of the Promised Land.